Fresh on the heels of a fourth GRAMMY Award (2016 Best Small Ensemble/Chamber Music Performance for Filament), ​Eighth Blackbird yesterday was awarded the prestigious MacArthur Award for Creative and Effective Institutions, a one-time grant of $400,000, given in recognition for past leadership and success, and an investment in the future of the organization. For these Awards, the Foundation does not seek or accept nominations.

Co-Founding Member, Co-Artistic Director, and Pianist Lisa Kaplan speaks for the ensemble in saying, “We are hugely honored and grateful to receive the respect and support of the MacArthur Foundation. When we formed the ensemble as six Oberlin students in 1996, we set out on a mission to move music forward through innovative performance, advocacy for new music by living composers, and a legacy of guiding an emerging generation of musicians. This Award enables us to build upon the strong foundation of the past 20 years and to expand and secure the organization’s mission for the next generation, with exciting news to come.”

The Award has been presented annually since 2006 to organizations across the country and around the world that demonstrate exceptional creativity and effectiveness. This year’s 14 recipients are drawn exclusively from Chicago’s diverse arts and culture community in order to strengthen the city’s vibrant cultural life and underscore the Foundation’s commitment to its hometown.

Eighth Blackbird continues its 20th anniversary celebrations with tour dates that feature works from the 2016 GRAMMY Award-winning album, Filament (Bryce Dessner‘s Murder Ballades), fully-produced and “unplugged” performances of Hand Eye (a collaboration with superstar composer sextet Sleeping Giant, out on record April 8), a splash at Knoxville’s Big Ears Festival (April 1), the premiere performances of David T. Little‘s Ghostlight (DC, Chicago, Vancouver), and a joint-show with Chicago’s Matt Ulery Trio (Richmond, VA). Read on for more on the tour, albums, and residencies at the Museum of Contemporary Art Chicago, University of Chicago, and University of Richmond.

Thanks for listening,
Sarah 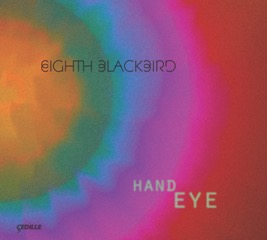 The centerpiece of the group’s 2015-16 touring season, Hand Eye pairs the six players of Eighth Blackbird (“one of the smartest, most dynamic contemporary classical ensembles on the planet,” Chicago Tribune) with the six composers of Sleeping Giant (“unquestionably some of the most talented and engaging young composers around,” New Yorker). The result is a 75-minute suite that fizzles with the alchemy of twelve strong personalities. Heard as a continuous whole, Hand Eye opens on a shimmering landscape (South Catalina, Christopher Cerrone) and morphs into the buzzing contagion of an Internet meme (Mine, Mime, Meme, Andrew Norman) before accelerating to a high-velocity adventure-ride (Conduit, Robert Honstein). It then flickers and pulses like ink on paper (Checkered Shade, Timo Andres), features a soul-studded jam session (By-By Huey, Ted Hearne), and closes with a coda of warm but tattered beauty (Cast, Jacob Cooper).

“…a rewarding and charismatic 75-minute piece that proved to be strikingly unified in its musical materials and emotional effect.” — Mark Stryker, Detroit Free Press

“Each piece of this diverse, eclectic and colorful suite had its own voice and character, qualities that came through in Eighth Blackbird’s exhilarating performance. Yet, as the creators intended, the overall work had narrative thrust and a structural arc, even a shared aesthetic, common among younger composers today, that values the mixing of styles from all realms of contemporary music.”  — Anthony Tommasini, The New York Times

“…the musical responses, though composed separately rather than collaboratively, have shared elements—not least, a restless stylistic omnivorousness—that make them seem like interlocking pieces of a puzzle.” — Allan Kozinn, Wall Street Journal

Commissioned by the Maxine and Stuart Frankel Foundation for the Great Lakes Chamber Music Festival and co-commissioned by Carnegie Hall, Hand Eye is a collection inspired by a collection. Each of the six composers of Sleeping Giant chose a work belonging to the Maxine and Stuart Frankel Foundation for Art as springboard for his own musical contribution and each of the six pieces is inspired by one of the six members of Eighth Blackbird. Eighth Blackbird has packed houses for the show in New York (Carnegie Hall/Zankel Hall) Philadelphia, Chicago, and Richmond.

eighth blackbird also tours newly commissioned works by Bryce Dessner— a composer, guitarist, and music curator known widely through his band The National—and David T. Little, “one of the most imaginative young composers on the scene” (The New Yorker). Both works—Little’s Ghostlight (a world premiere, inspired in part from ancient ceremonies) and Dessner’s Murder Ballades (which explores acts of revenge and betrayal in the murder ballad tradition, and is included on the 2016 Grammy Award-winning album, Filament) are featured on a March 7 program at The Kennedy Center, Terrace Theater, as part of the Fortas Chamber Music Concerts. According to the ensemble, “the program explores the rituals of death, the fragments of music we use to hold on to those around us, or the cheerful tunes we use to forget them,” accompanied by pieces from David Lang(diet coke, grind, and wed) and Ted Hearne (By-By Huey from Hand Eye).

Ghostlight and Murder Ballades go on to receive Chicago premieres at the Museum of Contemporary Art Chicago March 25–26, as part of the ensemble’s residency there. The Chicago program offers an expanded version of Dessner’s Murder Ballades and features special guest Will Oldham aka Bonnie “Prince” Billy, who joins the ensemble to perform the spoken role for Frederic Rzewski’s iconic Coming Together, a piece inspired by a letter written by inmate Sam Melville months before the Attica prison riot that he helped organize, and that also brought about his death. Eighth Blackbird peforms Coming Together once more with Bonnie “Prince” Billy on a set with some of his original songs at the Big Ears Festival on April 1, paired with Dessner’s Murder Ballades.

Eighth Blackbird’s residency at the Museum of Contemporary Art Chicago (MCA) runs September 2015 through June 2016, where the group has taken over MCA galleries as studio space, rehearsing and performing as a living installation. Full open rehearsal dates can be viewed here and the last major concert program on the residency, Ghostlight, March 25-26, is detailed above.

Resident artist with the University of Chicago since 2000, eighth blackbird joins the Pacifica Quartet, conductor Cliff Colnot, and artistic director Marta Ptaszynska to form the new music collective known as Contempo. Now in its 51st season, Contempo has earned an enviable reputation for outstanding performances of music by living composers, both established and emerging. eighthblackbird works with student composers on campus and has performed on two Contempo concerts thus far this season: a portrait concert for outgoing artistic director Shulamit Ran on October 27, “Focus on Europe” on February. The two final performances, as part of “Tomorrow’s Music Today” programs, feature the works of doctoral students on May 13 and May 20.

eighth blackbird enjoys its eleventh year as Ensemble-in-Residence at the University of Richmond (Virginia) with six weeks on campus, working individually and collectively with students and performing concerts, master classes, and workshops. The 2015-16 dates include September 21–25, November 2–7 (in conjunction with the Third Practice Electroacoustic Music Festival), January 25–29, March 14–18, April 4–8, and April 11–18 (in conjunction with the Matt Ulery project). Following up a tour stop of the wildly successful Hand Eye in January, Eighth Blackbird performs a show with Chicago’s eclectic and jazz-infused Matt Ulery Trio on April 13 at the Modlin Center for the Arts. 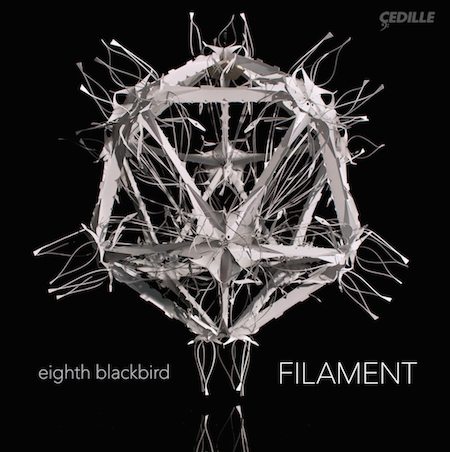 “This is programming that works itself out with the arithmetical elegance of, well, a Philip Glass score—and, like his music, it is as gratifying conceptually as it is to the ear… one of our greatest chamber ensembles, period.”  — Daniel Stephen Johnson, WQXR/Q2

“…the kind of genre-twisting avant-pop chamber music for which Mr. Glass and his generation paved the way…meditative music full of quirks and kinks.” — Corinna da Fonseca-Wollheim, New York Times

Reminder: The full album audio, program notes, hi-res images, and more can be downloaded from our press room (password: 3dotspress). A free public download of Dessner’s Tears for Sister Polly can be found here. 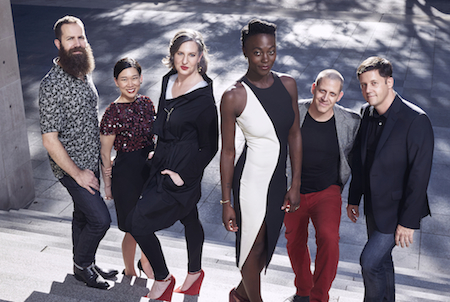 Eighth Blackbird’s “super-musicians” (Los Angeles Times) combine the finesse of a string quartet, the energy of a rock band, and the audacity of a storefront theater company. The Chicago-based, four-time GRAMMY Award-winning sextet celebrates its 20th anniversary in 2016: two decades spent performing for audiences across the country and around the world with impeccable precision and a signature style.

A winner of the 2016 MacArthur Award for Effective and Creative Leadership, Eighth Blackbird has been described as “one of the smartest, most dynamic contemporary classical ensembles on the planet” (Chicago Tribune). The group began in 1996 as a six entrepreneurial Oberlin Conservatory students and quickly became “a brand-name…defined by adventure, vibrancy and quality….known for performing from memory, employing choreography and collaborations with theater artists, lighting designers and even puppetry artists” (Detroit Free Press).

Filament centers around a live recording of Philip Glass’s early masterpiece, Two Pages, and includes world premiere recordings of works by Bryce Dessner (Murder Ballades), Nico Muhly (Doublespeak), and two remixes by Son Lux, whose tracks gather sounds from the other compositions on the album, stringing together the album’s musical ‘filament’ and adding the voice of Shara Worden (of My Brightest Diamond). Filament was selected as Album of the Week by WQXR/Q2 Music, Seattle’s Second Inversion, and the Chicago Tribune. The San Francisco Chronicle called it “wonderful…a fine release…comprising both restless energy and reverence.”

The centerpiece of Eighth Blackbird’s 2015-16 touring season is the concert-length production Hand Eye, which pairs Eighth Blackbird with Sleeping Giant—a superstar composer sextet (Timo Andres, Andrew Norman, Christopher Cerrone, Jacob Cooper, Ted Hearne, Robert Honstein) who each contribute one movement to the piece. For the fully produced version performed in select cities, the evening is complemented with projections by the acclaimed visual performance designer Deborah Johnson, aka CandyStations. The New York Times says,  “Each piece of this diverse, eclectic and colorful suite had its own voice and character, qualities that came through in Eighth Blackbird’s exhilarating performance. Yet, as the creators intended, the overall work had narrative thrust and a structural arc, even a shared aesthetic, common among younger composers today, that values the mixing of styles from all realms of contemporary music.” A recording of Hand Eye will be released April 8 on Cedille Records.

Eighth Blackbird’s mission—to move music forward through innovative performance, advocacy for new music by living composers, and a legacy of guiding an emerging generation of musicians —extends beyond recording and touring to curation and education. The ensemble served as Music Director of the Ojai Music Festival (2009), enjoyed a three-year residency at the Curtis Institute of Music, and holds ongoing Ensemble-in-Residence positions at the University of Richmond and the University of Chicago. The 2015-16 season brings a lively residency at Chicago’s Museum of Contemporary Art, featuring open rehearsals, an interactive gallery installation, performances, and public talks.

This site uses cookies and other tracking technologies to assist with navigation and your ability to provide feedback, analyze your use of our products and services, assist with our promotional and marketing efforts, and provide content from third parties. Read more in our Privacy Policy.OkRead more